Jane Fonda Discusses Her Lifetime of Cosmetic Surgeries While at Cannes

Jane Fonda Discusses Her Lifetime of Cosmetic Surgeries While at Cannes 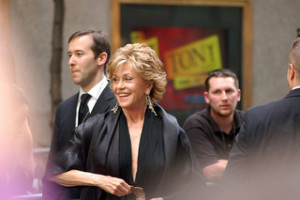 Jane Fonda recently talked about her many cosmetic surgeries while attending the Cannes Film Festival.

While Dr. Rand didn’t perform her procedures, we found her take on plastic surgery interesting, open, and supportive.

Fonda, now 75 and starring in a new show called Grace & Frankie, has had a long-arching career that spanned film and the personal fitness world. According to a recent article by the United Kingdom’s Harley Medical Group, she has openly discussed her many cosmetic surgeries over the years, and has also been able to talk about her 20-year battle with eating disorders. In her words, “When I was 45, I was going through a 20-year battle with anorexia and bulimia. I think it was just a matter of deciding that I was either going to live or die. I went for the light. I went for living.”

In addition to her many leading roles in films of several decades, Jane Fonda’s legacy also includes her role as a fitness expert, as one of the early fitness gurus of the modern exercise movement.

Though she says exercise is her number one beauty secret, Fonda has had a few different cosmetic surgeries over the years. At the beginning of her career, she decided to have breast implants, and then a full facelift in her 40’s, with a second face lift in her 70’s. She recently had a chin lift and eye surgery to address the bags underneath her eyes.

Throughout these surgeries, Fonda says it was crucial to retain those aspects of her appearance that defined her as an individual. As she says, “I made sure that they kept my lines. I didn’t want to lose my wrinkles; I just wanted to lose the bags under my eyes. I don’t like it when it’s overdone, but we do live in a time when, if you can afford a good doctor, you can have subtle plastic surgery.”

Schedule a private consultation to discover the rejuvenation available to you

Accessibility: If you are vision-impaired or have some other impairment covered by the Americans with Disabilities Act or a similar law, and you wish to discuss potential accommodations related to using this website, please contact our Accessibility Manager at (425) 688-8828.

A message from Dr. Rand & team

Here at Northwest Center for Aesthetic Plastic Surgery, it is and always has been our primary goal to keep our patients safe when visiting our office.

As a fully accredited facility by the American Association for Accreditation of Ambulatory Surgery Facilities, Inc. (AAAASF), we are held to the nation’s most demanding standards for ambulatory surgery facilities. In addition, for optimum patient safety we are also licensed by the State of Washington Department of Health.

Those standards mean that we maintain a very clean and sanitary facility in all high-touch areas and hand sanitizing stations are placed throughout the office. We are requiring all high risk patients and anyone with symptoms that include fever, cough, and shortness of breath to stay home. Our waiting area has a small number of people at any given time and you will be able to maintain a 6 foot distance between any other person.

We are a healthcare facility, and are business as usual. We will continue to remain open to take care of our patients. If you have any questions, please feel free to call our office at (425) 688-8828.